The Chancery and the Residency

Built by the sea, in the new diplomatic and administrative Al Khuwair district, half way between the old Muscat and Seeb international airport, the new French Embassy in Oman was completed at the end of 1989. 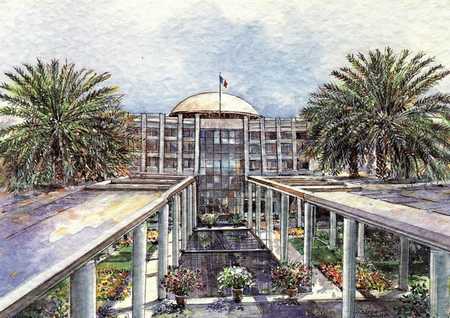 Its architecture immediately catches the eye: right angles, curved vaults, oblique lines show off a striking and unusual perspective, all the more so because the neighbouring buildings are of a more classical style.

The building is the meeting point of the Omani culture and the French expertise: its design includes elements from the regional traditional architecture, blending them in a unity of ultra-modern design and construction. We can thus recognise colonnades, archways, low vaults, stone railings, the dome...

Above all, the Embassy stands out by its vast hanging porch-roof: this impressive concrete layout covers all the building’s land space (5000 m² out of 8000).

It is made out of 1500 capitals supported by 200 pillars. The 180 metres long unity undergoes different movements:

It slants 3.21° towards the sea, which allows to harmonise the monumental height of the first pillar (6.50m) on the Embassy’s entrance side, with those of more human and intimate dimensions (3.50m) in the residency’s garden on the seaside.

It is slightly tilted towards its central axis (1°).

Finally, it widens/broadens out according to a 2° angle from the mountains to the sea.

This triple movement (downward slope, inclination towards the centre, general broadening) is that of is that of the valleys, the “wadis” which go through the Omani mountains, linking them to the sea. The image of the “wadi” becomes clearer with the décor of the entrance esplanades, made of decreasing size boulders, and it is confirmed by the central stream, which runs from basin to basin from one end of the site to the other, giving the impression of a “falaj”, the traditional Omani irrigation system. 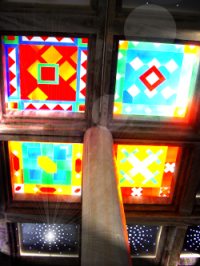 Despite its size, the porch-roof appears light and airy: multiple openings arranged in its make it some sort of a moucharabia, brightened up by some stained glass windows. The porch gives a powerful unity to the four main parts of the building (two wings of 3 live-in accommodations each, the central unit with the diplomatic and consular chancery, the Ambassador’s residency). It takes them in a single frame but also joins them in a same perimeter of shadow and freshness. For this porch is, for its designers, a “metaphorical moucharabia”: just like the traditional moucharabia on Arabic windows breaks the sunbeams and protects the interior from excessive light and heat, the Embassy’s moucharabia defines a shaded space, sheltered from the sweltering Omani sunshine.

A partition is thus established between the upper and lower parts of the buildings. The different building materials used stress this: upper parts are indeed clad with light grey Carrara marble whereas lower parts are covered with a dark blue varnish. Above the moucharabia, the light irradiates, beneath, it is absorbed.

A 14 tonnes metal dome, perfect symbol of Arab architecture, caps the chancery. It artificially creates an occasional draught to cool down the chancery’s patio. It also protects the inner courtyard from the sun while letting the light in to illuminate the offices (cultural department and audiovisual room on the ground floor, consular chancery on the first floor and diplomatic chancery on the second floor).

A “falaj” covered by a grid runs right through the patio to the garden and the sea.

The garden separating the chancery from the residency was designed as a floral palm grove, where the central falaj widens into a small pond.

The residency opens by way of a heavy wooden-carved double-door, of traditional style, which deliberately strongly contrasts with its concrete environment. The door is surrounded with a glass façade, allowing the sunlight to illuminate the residency’s hall. This latter leads the visitor to the reception rooms, through a high and wide frosted glass partition, with a scenery drawn by the artist Folon: transparent birds herald those constantly flying over the residency’s garden.

Lounges open on to a black marble terrace and a last pond extending the entrance falaj prospect.

The garden is modern, yet French: the notions of symmetry and geometry of the architect Le Nôtre are respected. On one side, a basin and its fountain, on the other side, the pool, both surrounded by the same grass lawns and flowerbeds. Between the two, the central falaj ends its course and flows into the sea.

During reception evenings, when the Embassy is lit up and when the chancery and residency’s doors are open, eyes can take in a remarkable inner perspective at a glance, from the entrance pillars to the sea: it reminds of a hypostyle room of a modern Karnak.

A link between France and Oman, between the mountains and the sea, between knowledge from the past and techniques of the future, the French Embassy is a genuine prestigious construction. Based on almost 300 years of French-Omani relationships, it deliberately looks to the 21st century and a new dimension of bilateral relationships.